Home » About us » Calendar

13:00 Welcome by Prof. Dr. Manfred Spreafico - Preseident of the CHR
13:10 Introduction and Goals of the Workshops by Dipl.Met. Peter Krahe

Theme block II - The creation and interpretation of climate scenarios

Theme block III - Discharge regimes and hydrological extremes - What do the models predict?

Based on the results of the project 'The Impact of Climate Change on Hydrological Regimes and Water Resources in Europe', funded by the EU (1995-1997), a working group chaired by the International Commission for the Hydrology of the Rhine basin (CHR) proposed management strategies and policy implications with regard to the possible impact of climate change on hydrology and water resources management. The findings are published as the so called Nijmegener declaration 1997.

There has been a marked increase in recent years in the resources dedicated to investigating the problems arising from climate change with respect to hydrology and to some extent to water resources management, too. Many of these studies are concentrated on the basin of the River Rhine. Additionally, the extreme flood situations that have meanwhile occurred in the basins of the Danube, Rhine, and Elbe have brought foreward - in terms of both expert discussion and public debate - questions regarding causes, with particular reference to climatic matters. Apart from the effects of predicted climatic changes on meso scale (regional) river basins, changes in the discharge characteristics of major rivers are also of great interest.

In order to review the actual state-of-the-art, a workshop was held on June 24th and 25th 2003 in Ede (The Netherlands). The questions arising from these subjects were discussed by experts from several disciplines. The presentations and discussions were organised in three thematic blocks:

The event was addressing the scientists from research institutions and water management authorities, that deal with the above-mentioned problems. The expert discussion was designed to raise the current level of knowledge in terms of its specific connection to the Rhine basin. With the participation of researchers dealing with the same subject in neighbouring river basins - such as the Meuse, Danube and Elbe - the intention was to encourage an exchange of information regarding the methods being applied.

The workshop investigated the question of whether current knowledge and procedural strategies can be used as a basis for future water management. Knowledge deficits in this area were identified during the workshop sessions. Discussion outcomes resulted in recommendations for future research activities and homogenised working procedures with a view to find solutions to the above mentioned problems.

The steering committee of the workshop has summarised the findings and recommendations issued from the presentations given during the two-day event. Moreover, an evaluation of the results with regard to further actions in water resources management is given hereafter.

The global climate is changing

These findings are likely to have an impact on the hydrological regime on the Rhine basin scale.

For the interpretation of the spatial trend patterns the atmospheric circulation types as well as the orographic obstacles have to be considered. 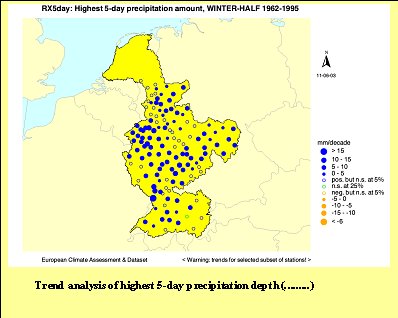 Natural stream flow has definitely changed in the last decades
Increase in stream flow, mainly in winter (and spring), mainly for the low and mean flows. (presentation Burlando)
Changes in precipitation amounts cannot alone explain changes in stream flow. Climate variation overrules other basin characteristics at least for generation of floods (this applies as long as no water regulation measures are taken)
Runoff in mountainous areas is particularly reactive to climate change. 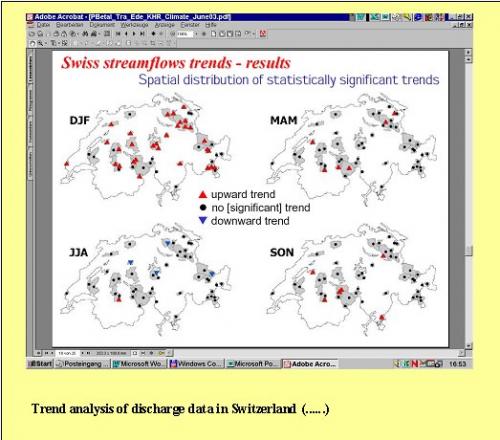 Assessment of man made and natural variability
Collect and homogenize long hydrological and hydrometeorological observation series, complemented by proxy data, in order to extend the series further back. Current field monitoring has to consider the spatial heterogeneity of the physiogeographical characteristics of river basins.

Homogenisation of statistical trend analysis methods over the Rhine basin
Statistical analysis should be applied on different scales (continental, regional and local) and with agreed upon methods. This is necessary for the interpretation of the spatial variability of trends in climatological and hydrological time series.

The currently ongoing research efforts in the field of change detection in hydro-climatological time series has to take into account the above recommendations, so to provide the necessary database and knowledge for an efficient calibration and validation of hydro-climatological models. Once the very complex interactions between basin-related factors and hydro-climatological variables are correctly assessed, these models can be efficiently used for the creation and interpretation of climate scenarios.

Climate change: from global to the River Rhine basin

Scenario runs show (based on most models validated in the EU-project PRUDENCE) : 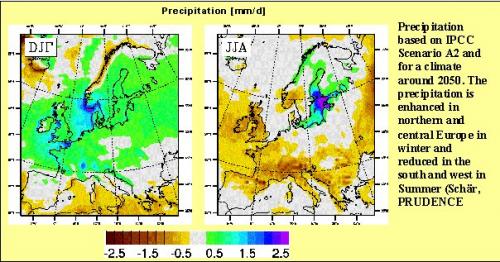 For the Rhine basin at least three regional numerical models and several statistical models exists. Climate scenarios are calculated with the REMO model. The other two models (KNMI RACMO and Swiss CHRM model) are in test mode.

For regional and local climate modeling it is sufficient to use a horizontal resolution of 0.16° (18 km) as grid cell (with the exception of regions with very complex topography).

The regional models have a tendency to underestimate high precipitation events in summer due to an underestimation of convective processes.

Additional uncertainties persist due to the important role of soil moisture and other land surface processes.

With decreasing size of the river basin the model results become less reliable.

Will we have more floods and droughts?

Theme block II -Discharge regimes and hydrological extremes - What do the models predict? 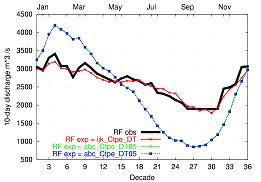 Knowledge, or at least an estimation of climate change in the River Rhine basin in the past and in the future is a prerequisite for the development of water resources management strategies. For the historical period reliable measurements are available for the last 100 - 50 years. Analysing these data sets, clear trends can be detected. Although the scientific community is still discussing whether or not all the long term variation can be related to the well known anthropogenic influences, it becomes more and more obvious that the variability reaches such dimensions, that these have to be considered in future planning activities in view of necessary adaptation measures to the impacts of climate variability and change.

Although at present no founded quantitative information can be given yet about the influence of climate variability and change on discharge and groundwater recharge nor on the occurrence of hydrological extremes like floods and droughts, potential hazards can be derived from the information and scientific analysis that is presently available, which call for action from politics, economy and science and aiming at the preparation of mitigative measures for the protection against extreme events and adaptation to the consequences of climate variability and change . Considering the still increasing concentration of economic values especially in flood-prone areas, there is a necessity to create an environment of rational awareness of risks and vulnerability to extreme events and the need to plan and implement adequate structural and non-structural measures to protect the potentially affected population from possible disasters, taking into account our present knowledge on climate variability and climate change.

Being aware of climate change trends and processes and its potential hazards, preventive adaptation and mitigation objectives as well as accepted residual risks should be adapted periodically to the changing environment and scientific knowledge and solutions with maximum flexibility should be strived for. For the medium range period new methods for design and planning must be developed, that are capable to quantify hazards in a changing climate.

The principle of "No regret and flexibility" was a recommendation for an appropriate management response given by CHR in the so-called Nijmegen Declaration (1997). The results of the workshop underline this strategy. Long-term plans should be flexible and adaptable to a growing knowledge base and the dynamically changing hazard situation. Sustainability in an ecological, economical and social sense should be the guiding principle for planning and decision-making. Anticipatory measures, which serve different goals, should be undertaken in combination with on-going activities, e.g. sustainable flood protection measures. Not all of these measures can be justified with the objectives of flood protection alone but need to be undertaken from the viewpoint of a politically supported process of integrated flood management as a component of integrated water resources management taking into account anticipated effects of climate change.

With the presently available tools for regional climate modelling and coupled hydrological modelling in the Rhine basin, essential building blocks are provided to determine the sensitivity and adaptive capacity of hydrological systems under consideration of socio-economic components, locally as well as for the entire Rhine basin. The core problems must be identified and based on their identification, strategies to adequately address these problems need to be developed. For decision making in water resources planning the following steps should be taken into account:

The demand for a uniform approach to the problem of climate change impacts in the entire Rhine basin asks for integrated thinking and acting on local, regional as well as national and international scale in the Rhine riparian states. Therefore, inputs from politically influenced subject areas such as spatial planning (including building codes, industrialization and infrastructure development), nature conservation, agriculture and forestry are absolutely necessary. Besides this, the challenge of decision making in an international river basin such as the River Rhine basin with regard to climate variability and change has to be outlined. This is due to the fact that adaptation and mitigation strategies should follow an integrated approach for the whole basin. This requires, as a first step a consensus of the awareness and assessment of the problem in the whole basin. Therefore, the communication and exchange of scientific findings between research groups and water management authorities focusing on a specific river basin becomes an important item in the decision making process. It can be stated that different acceptance levels of the quantitative results of climate impact research, as well as different strategies for transforming these results in water resources management actions can be observed. The outline of river-basin wide climate and hydrologic projections and their inherent uncertainties in prediction becomes an important part in decision-making with respect to climate change impacts. 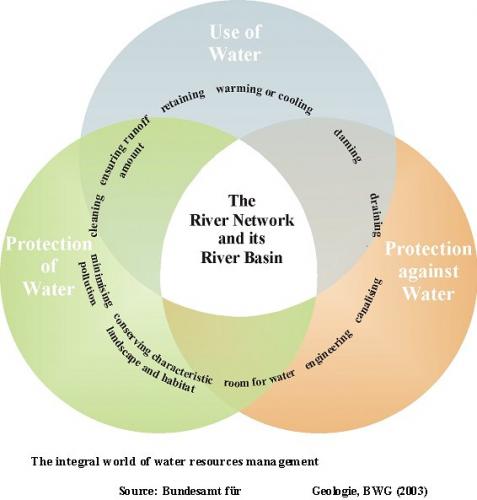